Out of the Sky, Into the Dirt solo exhibition by Aaron Coleman at Adventureland Gallery in Chicago, IL

Hung neatly and carefully, the prints were nonetheless fragments of an infinitely complex narrative; a smoldering world tearing apart in a wash of smoke and tormented faces, infused with sometimes belligerent, always spectacular phrases that like koans returned us to rapt attention. These phrases struck us as messages both infernal and absolute, emblazoned with the cinematic appeal of comic books and our special effects-laden action and disaster films – the two media fused together to form a consumerist apocalypse. The work was dense and outright heavy, and appropriately so, because we were looking at nothing short of the end of the world. 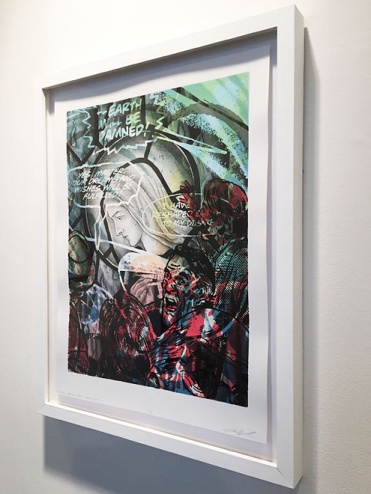 Aaron Coleman, Master, What Good Deeds Shall I Do?, 2014, lithography and screen print, 16″x12″, installed at Adventureland Gallery in Chicago, IL

In Master, What Good Deeds Shall I Do? conflicts and coincidences arose from a sublime center, which featured the Virgin Mary, haloed, meticulously rendered in profile and outlined in bold lines like stained glass. Only her face remained visible in the chaotic surge of her surroundings. Overlapping figures gazed in various directions; one man yelling in terror, another turning his back, wearing a fedora, and two others contorted, leaning and struggling. These figures were heavily blended with other indistinguishable shapes, images, and speech bubbles that read, “Earth will be damned!” “Yes, master, your dreams and wishes will be fulfilled!” and “I have reshaped [earth] to my desire,” rendered in comic book lettering. We were filled with both a sense of the heroism and an awareness of the terror and violence that undergirds that heroism. 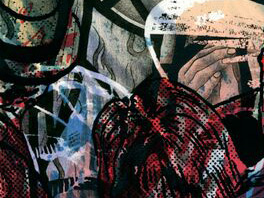 Aaron Coleman, Master, What Good Deeds Shall I Do? (detail)

The layered histories and styles have formed a new mash-up, a monstrosity of moral disorder and turmoil in the information age. Backlit as it would be in a church; the stained glass positioned us as viewers on the interior of the church, within the dark mass of chaotic figures and speech bubbles. Both the comic strip and the classical iconic stained glass are forms traditionally used for visual narrative, but in this image the narrative was remixed and layered so heavily that the content was broken, only conveying a mess of confusion and terror. This confusion and terror was ultimately the heart of the heroic narrative, trapping us in it. We were washed away in the flood, redeemed, or taken vengeance upon – or perhaps wrapped up in a villainous scheme. Master, What Good Deeds Shall I Do? revealed to us the power and possibilities of mythmaking. It communicated to us in a language of the heavenly and the exultant – a language of power, tyranny, strife, and responsibility.